The North Rift Rehabilitation Centre (NORIREC) is a project of the Diocese of Eldoret ACK serving Western Kenya. It is based on the concept of Community Based Rehabilitation (CBR). The overall aim of the project is to provide community-based physical therapy and rehabilitation to people with disabilities (PWDs) of all ages. NORIREC/CBR is focused on helping PWDs to fully participate in education, economic, social and community development while maintaining their dignity and self-worth. Corrective surgery, treatment and rehabilitation are provided for PWDs and their families.

According to the World Health Organization (WHO), 7 percent of the world population will have or acquire a disability. In developed countries, including Kenya, less than 3 percent of disabled persons will receive any type of rehabilitation. NORIREC/CBR is a pioneering effort in the North Rift Valley – the largest province in the country – to make rehabilitation services available to those who may otherwise not have them.

Mobile Clinic:
NORIREC hosts about seven mobile orthopedic clinics throughout the year. Up to 200 PWDs travel to attend each clinic from the entire country and beyond. Approximately 90 percent of those served are children. During the clinics, PWDs are assessed by a medical team of rehabilitation specialists consisting of doctors, therapists and technicians. The team evaluates a range of conditions including cleft palate, club foot, spina bifida, microcephalic and hydrocephalic infants/children, post-polio syndromes, burn deformities and congenital and/or developmental abnormalities. PWDs and their caregivers also receive a variety of social services from nutritional advice to psychological counseling.

Cerebral Palsy Retreat:
The retreats are designed for children who suffer from cerebral palsy or other illnesses that have resulted in brain damage. During the retreat, the children and their caregivers are taught activities of daily living. The retreat experience also provides a support system for families, communities and villages coping with an afflicted child. Retreats are held four times per year at the centre (NORIREC/CBR).

Early Intervention Strategies:
NORIREC/CBR strives to identify newborns and infants who suffer from various physical limitations. Parents are advised to seek corrective measures as soon as a problem is detected. For example, the centre has launched a Club Foot program to treat children before the age of two. Children are treated with manipulation, casting and necessary appropriate follow-up care.

Community Outreach:
Health workers from NORIREC/CBR are dispatched to rural villages on a regular basis to follow-up with PWDs after a clinic has been completed. The workers monitor the recovery and status of each child to ensure continuity of care in the child’s home environment. They also assist in scheduling appointments and facilitate transportation to and from clinical visits. This aspect of care is a critical component of the treatment process to optimize results.

Educational Programs:
Staff organizes and participates in numerous workshops within the community to educate residents about PWDs. Individualized instruction is provided to PWDs and their caregivers about rehabilitation and maintenance of care. Staff also delivers presentations at community meetings to inform villagers about PWDs and to change misconceptions and traditional beliefs about PWDs.

1/26/08 -- If you've kept up with the headlines, you know that Kenya is the midst of a violent struggle following presidential elections in late Decemeber between Mwai Kibaki and rival Raila Odinga. Since that time, nearly 700 people have been killed in ethnic clashes throughout the country. (Click here for the latest news.) NORIREC founder Percia Hutcherson left Kenya earlier this month due to the rising tensions. She said that the town of Eldoret had been virtually shut down with business and road closures. She remains hopeful that her work with NORIREC will continue when the situation improves. She is currently working on the completion of Phases II and III which require the installation of plumbing, furniture and rehabilitative equipment for the facility. Please continue to send your prayers for progress...and peace.
1 comment:

NORIREC: Updates From the Field

NORIREC Reaches Out To Community

11/4/07 -- The work of NORIREC continues! During the last week of October, Percia and the NORIREC Staff conducted an outreach campaign in the greater Eldoret community. It was a huge success! Percia says they drew dozens of people throughout the region. She also says that work is progressing on the NORIREC clinic facility. While the exterior construction is complete, they are still working on the indoor plumbing system for the new extension. Percia says the work may have to be extended into next year.
No comments:

“This usually calms them down,” Percia says in a soothing tone. And she is right. Within minutes the teardrops evaporate from the child’s round, chocolate-complexioned face.

Not every diagnosis is this simple to handle at the North Rift Rehabilitation Centre. As you enter the clinic’s main lobby, it is completely packed. Mothers, fathers and children sit shoulder to shoulder squeezed onto two available benches. Dozens more congregate outside sitting on chairs and makeshift piles of brick beneath a carport to shield themselves from the warm Kenyan sun.

“You can see by the number of people that there is a need for this,” says Josephine Chepkoech in a Kalenjin accent. 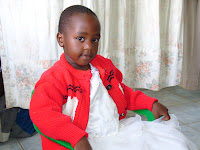 She has brought her young daughter, Celline, a bright-eyed four-year-old who suffered from knock knees, for a follow-up exam.

“It is located near rural areas where people are not aware," she explains. "Some hide their children, but the center enlightens the awareness of correction.”

On this day, more than 120 patients are visiting the clinic. They have come from villages throughout the North Rift Valley. Some traveled by matatu (public taxi). Others have walked the distance, like 18 year-old Eric Kibacii.

I met him outside the gates of the ACK compound. Eric wraps his slender ebony fingers around a smoothly carved wooden stick that stands almost as tall as his wiry six-foot frame. Gripping it firmly, he thrusts the pole into the ground. Then he hoists his lean figure in tandem to take a step with his right foot, while his left foot, crippled by polio, drags on the ground behind him. It has been six years since Eric has visited Percia for treatment.

“She took me to the hospital,” he recalls, referring to his operation just outside of Nairobi at Kijabe Hospital in 1997. “I had been coming for checkups with my mom, but when she died, I gave up.”

Orphaned, Eric now lives in a rescue shelter in Eldoret. For months he had searched for a childrens home to place his younger siblings. Now his priority is finding a way to correct his limp gait.

“I have been strained using the stick because all of my weight is on one side,” he complains. 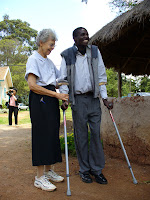 As soon as Percia sees him, she grabs his stick and trades it for a pair of crutches. She places them under his armpits and instructs him to bend his elbows and wrap his fingers around the hand mounts.

Step by step, Eric makes his way down a slight dirt embankment. After several successful attempts, he takes a break and heads for a cool spot resting beneath the grass-thatched roof of a round, open-air mud hut.

“It [the crutch] has helped me because one leg was very weak,” he describes. “It helped me to get balance so that I can walk properly.”

He adds: “God bless the work of her [Percia’s] hands for what she is doing to help people.”

The signs of appreciation can be seen everywhere. Inside Percia’s office, a note is taped to the wall near her desk. It is from the family of David Omondi and reads: “Our boy got a serious fracture but I thank God for your encouragement. You made the boy realize that disability is not inability….Now he is able to walk.”

“It’s a real challenge to work with these families because the children are a burden. Many are treated like babies,” Percia explains while taking a break at her desk. “We see all types of conditions. Some are severely burned from open fires in their village home. We also do work with kids who are brain damaged or suffer from cerebral palsy.”

Consolata Matirani is a hydrocephalic – a condition that causes excess fluid in her brain. 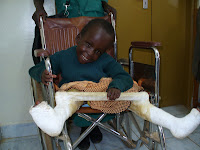 The 11-year-old is barely able to lift her enlarged head which is about the size of fully inflated medium balloon. Constrained by a wheelchair, she waits patiently with her mother outside of Percia’s office. Both of her legs are in casts connected by a plaster rod to keep them in place.

“The fluid [in her head] made her unable to walk,” explains Sister Judy, a missionary who runs a center for disabled children in Malava, a town northwest of Eldoret. “She had a crooked back so they placed rods in her back. They were removed in Kijabe but they think it helped straighten her back and legs.”

As I squat down to greet Consolata, she manages to raise her large head flashing the pearly whites of her teeth in a huge smile.

“She is happy,” her mother, Ezina Jafred tells me. “I think she might have died [had she not gotten treatment].” 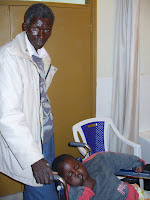 Johanna Chepkesio is also grateful. His daughter, Abigail, was diagnosed with clubbed foot at birth. Since her corrective surgery, he brings her to the clinic every two months.

“If the center were not here, my child may not have been treated at all and she would have been lame her whole life,” he says.

During this visit, he squeezes her hand and strokes her shoulder as the robust four-year-old wails loudly. Physical therapist David Mwaniki dips his hands into a small tub filled with a chalky, white semi-liquefied substance. He manipulates the plaster in a circular motion to mold around her right leg.

“I am putting the cast on,” Mwaniki explains. “She will keep it on for a month and will come back for a brace.”

The continuous influx of patients has outgrown the small center over the years prompting its ongoing expansion which is now entering its third phase. Beyond the rehabilitation room, lies an unfinished cement hallway with empty rooms adjoining both sides.

“We started from scratch…and have developed the clinic in phases,” Percia says following a walkthrough. “Phase One is an outpatient facility. Phase Two will be a rehabilitation hostel and Phase Three will serve as a guest house with five units where visitors will have a place to stay.” 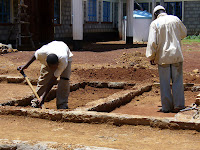 Construction is progressing but requires patience and additional funding. It took more than six weeks for the bushstone to arrive. The grey stone is chisled by fundis (construction workers) into a rectangular shape to erect the building. The delay almost forced Percia to find another vendor.

“Sometimes they tell us they can’t deliver it [the materials] because they don’t have a driver,” she says of the many explanations that she is given by various contractors. But she and her staff continue doing the best they can with what they have, a rewarding opportunity for Obadiah, a clinic manager.

“My eyes were open,” he says of his experience. “So many people have disabilities. It takes heart to work with these people. Many are marginalized, but we try to make them feel loved by the community.”
1 comment:

To Make A Donation: 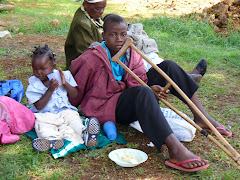 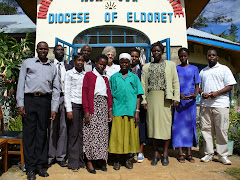 Born in rural Mississippi, Percia Hutcherson discovered her healing gift at a young age. She has been a physical therapist for over 50 years, giving over 45,000 treatments to disabled children and adults.

In 1990, Percia was invited to Kenya by the late Anglican Bishop Muge to serve as a missionary to the Diocese of Eldoret, so she could bring her gift of physical therapy to the region. She responded to a "felt call" after the death of "Johnny", her beloved husband of 43 years.

With the help of the Eldoret Diocese staff, which includes a health educator and community trainer, Percia developed and implemented the NORIREC/CBR project in rural areas. More than 2,000 people have received treatment, surgery or referral services because of her help. 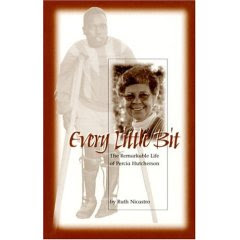 "Every Little Bit: The Remarkable Life of Percia Hutcherson"
By Ruth Nicastro